The Good, the Bad, and the Poopy

The Good, the Bad, and the Poopy

Posted at 22:29h in Uncategorized by Sabrina 2 Comments
0 Likes

When I’m in the midst of my day I tend to focus on the bad stuff that’s happening-The Suckage, as I like to call it. However, every day there are moments that are good. I noticed a few today, and I think it’s healthy for me to reflect on those and remind myself that we still have good times.

We were able to go out for breakfast with the East Coast Jeffers. Sam is generally more energetic in the morning, and he loves food (thank you, steroids), so that was an excellent combination.

The entire family, including the East Coast Jeffers and the Edelsons went to see Ben perform with the BSR Jammers (the youth set of the Basin Street Regulars). Sam enjoyed the music, he was aware that his big brother was on stage, and he clapped. I don’t know why that’s so significant to me; that he claps. Whoop dee doo. Babies clap. What’s the big deal? Well since he claps I think that means he gets it. He gets that he’s at a performance. He gets that you clap when a soloist is done even though the song isn’t. And then again, one claps when the song is over. That’s pretty complicated, especially the clapping for the soloist part. The thing I’m not telling you (well now I am) is that he claps late. Not late like, “Oh, look. Everyone’s clapping. I’d better get on board.” But late like, he needs more processing time late. He gets it. He’s with us. He’s paying attention.

He only took a couple of short naps. He really was awake most of the day. He was sleepy, but awake.

Sam awoke at about 1 this morning, and I’m fairly certain neither of us really went back to sleep.

Rising from a seated position, walking, and navigating stairs seemed harder today than ever.

He was really sleepy all day. That really scares me. I hate it.< The Poopy

He pooped his pants today. I don’t think he knew it was coming, and I’m not sure he knew it had happened. It happens once every few days. 8-year-olds shouldn’t poop their pants. This is what cancer does.

Completely unrelated to Sam, except that it did pull me away from him for an entire hour, Chance got into some mischief. Those of you who know us, know that Chance has an interesting history-picked up as a stray, adopted from animal services, presented with myasthenia gravis right around the time Sam was referred to hospice (Jeffers have impeccable timing), and eats anything and everything at his nose level (table height, conveniently for him) and below. Well I guess I didn’t educate our guests on his habits because when we were at BSR Chance got into Aunt Val’s luggage and consumed the following: a can of honey roasted peanuts, a large bag of cashews, 1/2 cup of M & Ms, and a Granny Smith apple. He also tore to shreds an entire box of tissues and chewed on a book about the Yankees. We all know that chocolate is toxic to dogs so after calling the vet and discussing the situation a bit I brought Chance to the vet for a possible induction of vomiting. Turns out a 71 pound dog consuming 1/2 cup of crappy chocolate is not cause for alarm or induced vomiting, so Chance got to keep his M & Ms, and is totally fine. In fact, I don’t think I’ve ever seen him so friggin pleased with himself. He’s lying next to me peacefully and odoriferously breaking wind as I write this. 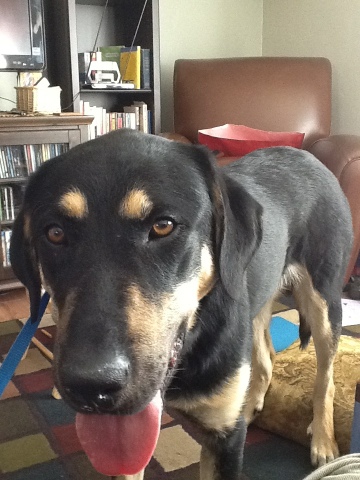