Posted at 21:39h in Uncategorized by Sabrina 3 Comments
0 Likes

One year. The passage of time since Sam died means nothing and everything to me at once.

For an instant I can capture the memory of Sam’s last moments as though they happened yesterday, yet I feel like I’ve been living without him for a very long time.

That Sam is gone at all still leaves me stunned, yet there are times when I can scarcely believe he was ever here at all.

On the one hand I am devastated and immobilized, on the other even I am dumbfounded at my ability to continue to live this life.

Recently I was confronted with the idea of my own mortality. Like many women, I was called in for a second look after my annual mammogram. This was a first for me, and women don’t talk about this frequent request for additional images so I assumed of course that I had breast cancer. I assumed I, like Sam, would die of my cancer.

Now all this drama happened over the course of only 3 days but at some point while I was imagining my demise, weeping more than usual, and feeling really sick to my stomach, I realized that all of this distress I was feeling over the possibility that I might have cancer might mean that I actually want to live? Why wouldn’t I welcome an end to missing Sam? Why wouldn’t I feel relief that rather than decades without him it might be over over sooner rather than later? Do I like living? I thought about all of the work for kids’ cancer that I have yet to do. The foundation has only just begun. My surviving children deserve to have a mother after losing their sibling. My husband couldn’t lose a wife after losing a son. My parents. Oh the horror. To think my parents would have buried their eldest son, their youngest grandson, and their daughter. Have we experienced enough loss yet? Have we filled our quota?

Dare I also admit that in addition to desparately wanting to stick around for my family and to continue to advocate for more funding for childhood cancer research, I also like life? There I said it. For selfish reasons, I want to live. I love my family. I need more time with them. I love my friends. I want to do more hiking and backpacking. I love teaching (yes, I am teaching again. Different story for another time). I like my post-apocalyptic TV shows, movies, and books (but I don’t have cable, so PLEASE don’t spoil The Walking Dead for me).

But it has been a year, and so John and I have been thinking about what to do to mark this date. It would be traditional for us, as Jews, to unveil Sam’s headstone at this time. We can’t because in true Edelson-Jeffers fashion we 1)Procrastinated, and then 2)The process of ordering the headstone did not go so smoothly. So this weekend, while Ben was home for a visit, we went to Sam’s grave and laid stones on the temporary plastic and metal marker, and spent some time. Tomorrow we will again visit Sam’s grave and place stones (and a pumpkin), and we will spend time working on Sam’s vegetable garden. 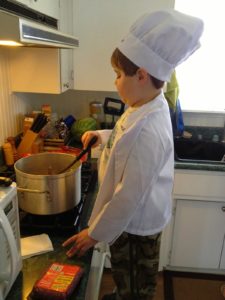 Sam cheffing up his Circle Bar B chili July 2013

Before Sam died it was a wish of his to grow some food-any good chef wants fresh produce for his cooking, so last summer we planted a garden. He got to see it sprout and grow, and he lived to taste the carrots and tomatoes. He died before the corn was ready.

I didn’t plant this year. What would be the point? I guess the point is that it was something he loved, and we honor his memory by continuing the tradition even though he is no longer here. So even though it’s Fall, in this part of California it rarely freezes so I think we’re pretty safe to amend the soil, plant the seeds, erect the fencing(to keep Chance from digging it up, because you know, he wants to), and dedicate the garden to the little boy who loved food and cooking (and eating). 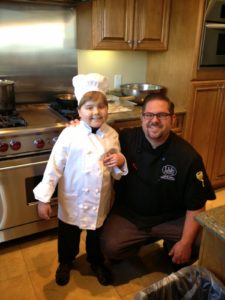