Posted at 10:42h in Uncategorized by Sabrina 4 Comments
0 Likes

We had no plans for Passover. No one wants to do anything. My mother has always hosted the Seder and led the planning, and this year, as her voice broke, she told me she didn’t want to do it. I offered to do something, anything, even just a nod to tradition, in our home. No takers. So I let it go (go ahead and sing. I am one of 4 people on the planet that has not seen this movie. We no longer have a child of the age that enjoys animated features). 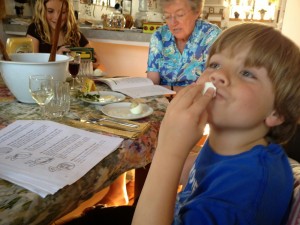 We used to be the Friday night service type. On a regular basis Abby, Sam and I would attend shul. Sam sat with his friends in the front row, and Abby and I sat with my friends, the parents of Sam’s friends, right behind them-within shushing and blessing distance. Three times a year we hosted oneg Shabbat after services in honor of our children’s birthdays (Oneg Shabbat means joy of Shabbat so we brought snacks and treats because food = joy, right?). We always had cake, and it had to be from costco.

When Sam was placed on hospice in June 2013 we stopped going to services. Services came to us most weeks. Rabbi Linda and Dr. Bob (our shul’s guitar playing neonatologist song leader) would come on Friday afternoons a sing Shabbat songs with us.

I don’t remember when it was that they stopped coming, but at some point Sam became too tired and uncomfortable to have people in the house. I still lit the candles and we said blessings and nibbled challah and I tried to remember the grape juice. Sometimes I would remember to buy it but Friday night would come and I would forget we had it.

After Sam died, I continued to observe Shabbat with John, Abby, and Ben in this very small way-Light candles, say blessings, nibble challah, sip juice-Oh my goodness! Look, there’s juice I bought before Sam died. I forgot to use it. Such a heavy feeling. He was here. Now he’s not. How is that possible?

Chanukah came and we observed. We lit candles. We sang blessings. We took photos. We opened gifts. I even bought gifts for my surviving children. I’m impressed by myself now.

It was sometime after Chanukah the Shabbat observance just stopped. I haven’t lit a candle, nor sung a blessing in months now.

Abby asked once, “Are we even jewish anymore? Ben’s an atheist, and we don’t do anything.”

If Abby asked me to return to temple, I would. If anyone, other than me, in the family showed any interest in observing Jewish holidays, I would. But they don’t. So I let it go. And the days pass. They are all the same. The only differentiation of one day from another is whether or not I have to set an alarm.

At the beginning of April, something started to stir. Yes, it was Sam’s birthday, and it was hard and sad and still is. I should have a 9 year old, not a dead 8 year old. But that’s not what caused the stirring.

As I watched the live feed of the 36 Rabbis Shave for the Brave, as I listened to my old camp and youth group friends and their friends singing and praying-I felt a pull. Those familiar melodies and words are powerful. And if I’m honest with myself, I’ll admit, I miss them.

But I can’t go back to temple. He was there. Now he’s not. I don’t think I can bear to watch his friends grow up. What would be the point?

So I’ve been thinking about Passover. My mother always reminds me that Rabbi Mendel said that all the Torah really says about Passover is that we must eat matzoh. To remember what our ancestors went through, simply eat the bread of affliction. (Now I will not enter into any kind of discussion whatsoever about the validity of of my retired rabbis ideas about observance. I am hanging onto my Jewish faith by a thread here, so just let it go.)

That simple idea drove my Google search of “alternative Seder ideas,” (which resulted in pages of websites to visit with ideas to “liven up your Seder,” and “take the boredom out of your Seder”). Too complicated, and boredom is not the issue here. The one result that stood out to me as a non threatening way to dip my toe back in the waters of Judaism was a “Chocolate Seder.” What drew me even closer was that the Haggadah for said Chocolate Seder comes from Hillel of UC Berkeley (Go Cal! Surprise! Ben’s going to Cal next year. He forgot to mention his Nobel Prize for Physics research involving a boat made entirely out of duck tape and cardboard on his Stanford application, so they rejected him.). 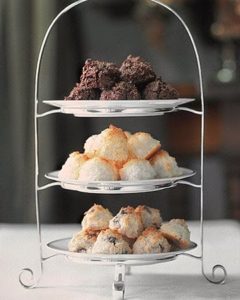 I tested my idea out on Abby. “How about if we have a Seder entirely comprised of Passover desserts? Bubbe’s matzoh candy, my dark chocolate macaroons, brownies…” Her response was an enthusiastic, “I like chocolate.” That’s enough for me. It is on.

What would Sam have thought? He would have been bouncing off the walls with excitement.

P.S. Not that anyone was thinking it, but if you were going to comment that a Chocolate Seder would not be kosher for Passover, Let. It. Go.