Posted at 20:12h in Uncategorized by Sabrina 0 Comments
0 Likes

Sam had the most wonderful day today. It’s not about an improvement in his symptoms. There’s been no miracle as far his cancer. In fact, if I gauge his days by how my back feels, then I’d have to say today he needed more help than usual in rising from his chair, walking, getting out of and into bed, and getting into and out of the car.

This is about his friends. We’re talking 8-year-olds here. Now my friends have been visiting since we’ve been mostly home-bound. I’ve known from the beginning (of the end) that Sam enjoyed visitors and that I needed them. Since early June there have been many visits from adults, and just a smattering from Sam’s friends. I didn’t think it mattered to him because he doesn’t interact. He hardly talks. I’ve told my friends with kids Sam’s age (or near it) that we want them to visit, and some of them have, but not much. Now I don’t fault my friends. People are busy, and maybe Sam’s condition is scary, and maybe for kids who didn’t really know him before, it’s a little boring.

It never occurred to me to reach out to the parents of Sam’s friends and ask them to visit. I assumed (you know what happens when you do that) that his friends didn’t want to come hang out with the sick kid for all the reasons I listed above (they’re busy or afraid, and Sam doesn’t really do anything so what would they do?). Last week a mom of one of Sam’s friends called me. I can’t remember what the purpose of her call was, or what we talked about, but I do remember that I just kind threw out there that what Sam really needs is for friends to come visit. She didn’t immediately jump on the opportunity, but a few days later floored me by asking in a message on Facebook if she could bring her daughter, and 2 other little classmates of Sam, and their mothers.

Today was play-date day. I was nervous. What if the kids felt shy and uncomfortable? What if it was awkward? What if Sam was tired and quiet, and the kids were bored and never wanted to come back again?

It. Was. Great. Sam happened to be in the bathroom when they arrived. Everyone sat down (okay, a little awkwardly) in the living room and waited for Sammy. When he walked down the hall and saw his old pals…oh, the look on his face. He doesn’t smile like he used to. He can’t. But he smiled, and it was beautiful and real. We chatted for a bit, and then I invited the kids to join Sam in a game of dominoes. I think it’s the simplest game on the planet. Even easier than Candyland. Although I had to offer Sam a lot of help to play, he played. And those kids were rockstars. They were natural, and they were patient, but they did not let Sam win. We played 2 games, we ate a snack, and then Sam wanted to play another game. At that point I offered Sam an out in case he was tired and wanted the visit to be over. He’s such a sweet kid he would never suggest that himself. When I asked if he wanted his friends to leave, he said, “No.” He wanted them to stay, so I suggested he show them the backyard and out we went. We sat around the (unlit) fire pit, and I picked apples for everyone who wanted one. The kids talked, the moms talked (and these are some of the lemonade stand moms, by the way. So they deserve high-fives. Not only are they organizing that awesome fundraiser for childhood cancer research, but they raised great kids.), and Sam sat and ate his apple. And no, he didn’t interact much with his friends, but I could tell that he was so happy that they were there. 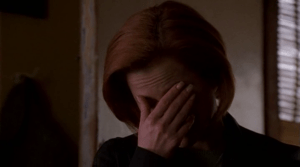 This is me when I realized tonight that I did not take A. SINGLE. PICTURE.