Posted at 17:41h in Uncategorized by Sabrina 1 Comment
0 Likes

I’m sure this is obvious to most of you, but aside from this period of our lives being unbearably sad at times, I am struck by the number of firsts we are racking up. Each one feels like an elephant on my chest. It seems like it’s too soon that life goes on, but it has.

There was the first time eating out that I wrote about, which only happened a week after Sam died. Since then there have been many firsts that were expected and dreaded, and many I hadn’t considered. 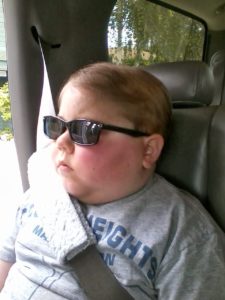 For example, I knew that my children would return to school and that John would return to work, but I didn’t anticipate how the silence of the car after I dropped off the teens would feel. The teens and Sam always
shared their good-byes, and then Sam and I would chatter on the way to his school/my work, or later I would just chatter to Sam as we headed home because he was no longer in school/I was no longer working. I found myself just losing it-crying all the way home because he is no longer in the back seat. 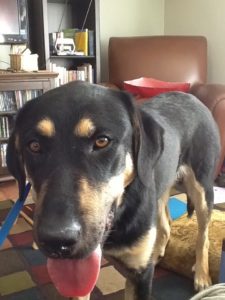 After a few days of that, the dog did something strange. He’s never been a go-for-a-ride kind of mutt. In fact, the first few times he rode in the car after we adopted him I had to pick him up and put him in. If you’ve ever met Chance, I know you’re pretty impressed with me right now-he’s a big boy. So Chance only went for car rides when he absolutely had to-to go to the vet, to get his nails trimmed. When we’d had him about a month we began to do some fun outings (dog park, beach, hiking trails) so that he would get the idea that the car didn’t always mean torture was coming (in the form of the slick floors of the veterinary office or grooming salon, but that’s another of his many quirks and so another post). But still, when I would leave the house he didn’t stand and beg and look at me with those eyes and ask to go.

Around the 4th or so morning back to school, as the teens and I were leaving, Chance got up from his doggie bed to stand in the living room and watch us leave. He cocked his head to the side, and gave me the puppy-dog eyes (you know the look), and whined. So I said, “Oh, OK, boy. You want to go to school?” He left the living room rug so fast it curled up beneath his feet as he raced across it to the front door. He trotted down the sidewalk with us, leapt gracefully into the hatchback, and sat. I’m not alone anymore. Whoever sits in the back seat gets drooled on and snuffled (that’s what I call it when a dog puts its wet nose on you) in the ear. The teens have someone (something?) to say good bye to. And I have a listener for my chatter all the way home. He’s not Sam. I still wish it was Sam who is back there. Sam is irreplaceable. But Chance is comforting. I’ll take what I can get.

Ok. So that turned into a post about Chance the Empathy Dog, instead of a post about firsts. That tells me that Chance has done his job well. 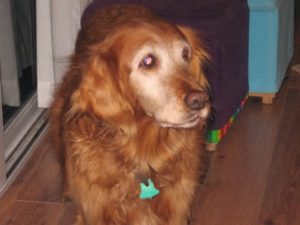 We adopted him this past March. You would think that a family in the midst of dealing with their youngest child’s cancer treatment would not want to take on one more responsibility. We wanted him because we missed having a dog. The Best Dog in the World, AKA Scarlett, died in June 2010, and it wasn’t until about 2 years later that we were ready to take a chance on another dog. I knew our next dog would always be compared to her. She was beautiful, gentle, and smart. She was a tough act to follow. In the Spring of this year we decided that not only were we ready, but that we needed a dog. We needed a little levity, and something positive to pull our focus from our fears about Sam’s future. 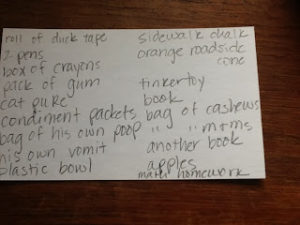 Chance is a pretty good mutt. He’s handsome, he’s gentle…that’s all I’ve got. I can’t call him smart. He’s eaten too many non-food items to wear that label. He digs. He won’t walk on wood/tile/linoleum floors. He nudges my forearm with his nose in order to solicit pats regardless of what I’m holding in my hand (nothing, a full and open water bottle, hot coffee). He barks incessantly at visitors and sniffs their crotches. When we walk he must turn and attempt to sniff every butt-human and canine-that passes. OK, not all the canines. He’s frightened of many of them, and tries to hide behind me. You know that lady on the beach with her dog’s leash wrapped around her legs several times because her enormous fraidy-cat of a dog is trying desperately to get away from the miniature poodle that is obviously trying to eat it alive? Yeah, that’s me. But he makes us laugh. He vocalizes like Chewbacca (you can hear him on the Rocketship video), he prances like a miniature pony all by himself in the backyard, he snores, and when he cocks that gigantic head of his to the side, I feel like we could have a conversation.