Posted at 21:49h in Uncategorized by Sabrina 1 Comment
0 Likes

It’s been a quiet last few days at the Jeffers’ house.

Sam is much the same-not interacting much, speaking very little, needing lots of help to ambulate. At least we can still make him laugh. Generally anything to do with poop, pee, farts, burps, or vomit gets a good belly laugh. He’s awake all day, but does get quite sleepy and spacey at times.

What’s quieter than usual is the dog. Chance is not well. On Thursday he didn’t bark once or get up to see who was visiting. He didn’t even ask me to pet him. Now he’s moving around a bit more, he barked a little today, and his appetite is fine. Right now he’s up and nudging me to pet him. He’s kind of moving like he did before we had him on medication for Myasthenia Gravis-he’s generally unsteady, slips around even on surfaces where he has traction, and his hindquarters give out sometimes. I haven’t walked him since Wednesday. Initially I thought he was suffering from an upset stomach because on Tuesday when we had all the friends over, everyone ate apples and Chance ate all the cores-probably about 10. He loves apples. Pulls them off the tree if they’re low enough. All day Wednesday he had the runs. I didn’t notice until after he had walked with Susan for over an hour. And that evening we did our usual 3 miles. I’m wondering if the combination of the runs, the cyanide in apple seeds, and his lack of eating Thursday and Friday (he takes his meds with his food) means he just needs to rest and build up the medication in his system again. I hope. If he doesn’t perk up tomorrow it’s back to Dr. Joel he goes.I think this may be Chance’s 5th chance. The pound sure picked a good name for him. 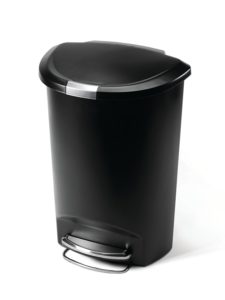 I’ve been borrowing Amanda’s dog since Wednesday, but tonight the family was gone, so no dog for me, and the teens were at temple. So no teens, no dog, no Amanda, means I walked alone. It was rough at first, uncomfortable to have no distractions from my dark thoughts. After a while, when I had cried it out, it was kind of nice to just let my mind wander.

By they way, the locking trash can arrived.