As the world turns

As the world turns

Posted at 22:00h in Uncategorized by Sabrina 0 Comments
0 Likes

Yeah, last night was a little better but not much. I guess I just have to accept that Benadryl works and use it. Poor little guy has his days and nights mixed up.

I had an interesting experience that started with his 2nd wake-up at 4:30 (told you it was better). Every time I opened my eyes the room spun around me. It’s really hard to convince a child to go back to sleep much less get up, go to the bathroom, and dose out Benadryl, walk back to the bedroom, sit the child up, hold him while he sits, and pour medicine into his mouth-all whilst the world spins around you.

After about 20 minutes of, asking myself, “Is this really happening?” “I can do this, right?” I called for John. He took over with Sam, while I stumbled to the master bedroom. I felt a little nauseated, but I managed to sleep until 8. Sam, thanks to Benadryl, slept until 7. I woke up still spinning and nauseated, had some dry heaves, but by about noon I was good.

Is that what they call vertigo? Like I said, it was interesting. And really, I’m fine. I even went for a run tonight. Of course I pulled my calf. Again. At least I’m not spinning anymore.

As for Sam, he continues to decline. He needs so much help walking, I don’t think he could do it alone. He’s still awake most of the day, but he spends a lot of time in his chair or on the couch just kind of spacing out. He listens when we read to him and gets the jokes and laughs.

And world keeps turning, as evidenced by the arrival of October and the eldest child’s birthday. Tonight we celebrated Ben’s 17th a few days early. I can’t imagine what he wished for. 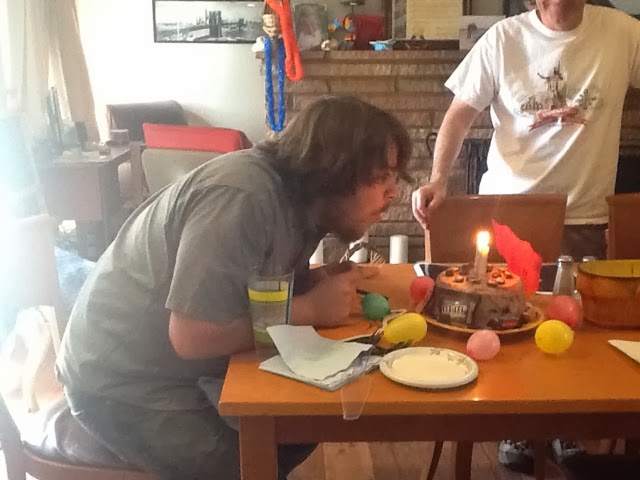